Posted on May 7, 2013 by Webmaster for the greatest websites in the world 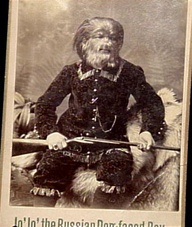 Fedor was born in Russia in 1868 and like his father, Adrien Konstantinov Jeftichew, the boy had generalized hypertrichosis. This condition, also know as “werewolf syndrome”, results in thick hair covering all of the body except the palms of the hands and the soles of the feet. Fedor was exhibited initially in France with his father, also know as “The Siberian Dog Man”, when Fedor was just five years old.

After his father drank himself to death, Fedor was taken to England where he was exhibited by Charles Reynolds. In 1884 P.T. Barnum heard of the hairy boy and brought the sixteen year old to the United States to appear in his Barnum and London Circus.

To make the his new exhibit more appealing to the public, Barnum renamed Fedor, “Jo Jo The Dog faced Boy” and created an elaborate story regarding the boy’s background. According to the story, a hunter in Kostroma tracked a wild man and his child to a nearby cave where the two had been living as savages. The hunter and some village men later cornered the savages in the cave and several of the village men were killed, as the father fiercely defended himself and his offspring. In the end, however, both savages were captured. While the young wild boy accepted his domestication and with the help of scientists who taught the boy to wear clothes and speak. The father so wild that he could not be civilized had to be confined to a cage, where he soon died.

Fedor toured with Barnum’s circus until around the turn of the century. He then toured the world until his death on January 21, 1904 while on exhibit in Greece.